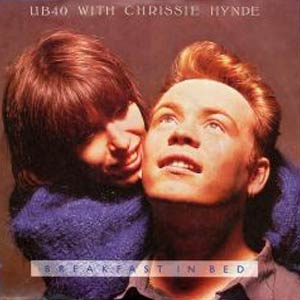 UB40 with Chrissie Hynde – Breakfast in Bed – Official Music Video
The song was written by Eddie Hinton and Donnie Fritts, and originally recorded by Dusty Springfield (1969). The cover by UB40 was released as the lead single from their eighth, self-titled album. It was released in June 1988 with instrumental version of the song on the B-side. The single peaked at #4 in the Netherlands, #5 in New Zealand, and #6 in the UK.
“Breakfast in Bed” was covered by many other artists, including Shirley Bassey (1971), Nicole Scherzinger (2004) and Joan Osborne (2007).

Read “Breakfast In Bed” by UB40 on Genius
Share this: