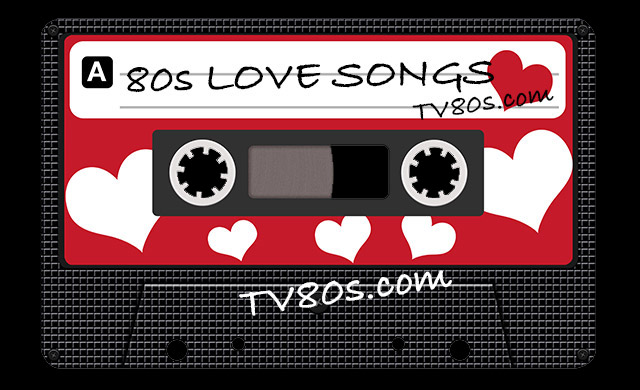 Our selection of greatest love songs of the eighties. What’s your favourite 80s ballad? Cast your vote or let us know in the comments below.

Hello! Is it me you’re looking for?
’cause I wonder where you are
And I wonder what you do
Are you somewhere feeling lonely?
Or is someone loving you?

The third single from Lionel‘s multi-platinum 1983 album Can’t Slow Down. It went to number 1 on the singles chart in the U.S., Australia, New Zealand, Netherlands and the U.K.

The single from Stevie’s 1984 soundtrack album The Woman In Red (romantic comedy film starring and directed by Gene Wilde). It hit number 1 spot on the singles charts all over the world, including the U.S., U.K., Australia and Germany.

The third single from the Eurythmics‘ sixth album Revenge (1986). The music video was directed by David A. Stewart. The ballad reached number 1 on the charts in Poland and Top 20 in many European countries.

The lead single from the band’s 1984 album Agent Provocateur. It reached number 1 in many countries, including the United States, Canada, U.K. and Australia.

The fourth single from Roxette’s second album, Look Sharp! (1988). The single was originally released in Sweden only. Its 1989 re-release reached number 1 on the singles charts in the U.S., Canada and Poland.

The third single from the band’s 1984 Heartbeat City album. The song is sung by The Cars‘ bassist Benjamin Orr. The music video features Ric Ocasek’s future wife, model and actress Paulina Porizkova. The single reached number 3 in the U.S., Norway and Ireland and #4 in the U.K. and Germany.

The first George Michael‘s solo single – (credited to “Wham! featuring George Michael” in the U.S., Canada and Japan), however the song appears on Wham!’s 1984 album “Make It Big”) and it was co-written by Andrew Ridgeley, the other member of the Wham! band. The single hit number 1 spot in the United States, United Kingdom, Australia and many other countries.

Romantic ballad Cherish by Kool & the Gang was released as a third single from the band’s multi-platinum album Emergency (1984). It reached number one on the singles charts in Ireland and Canada and reached #2 on the Billboard Hot 100 Chart in the U.S. and top ten on the charts all over the world in 1985.

This time we go sublime
Lovers entwine-divine divine
Love is danger, love is pleasure
Love is pure-the only treasure

The song was written by FGTH‘s members  Holly Johnson, Peter Gill, Mark O’Toole and Brian Nash. It was released as a third single from the 1984 album Welcome to the Pleasuredome. The single reached number 1 on the UK Singles Chart and top ten in many European countries, being successful also in Australia and New Zealand.

The first single from Jennifer’s 1984 eponymous album. It hit number 1 spot in many countries, including U.K., Australia and Spain.  The song was covered by many artists (for example Celine Dion, Laura Branigan and Air Supply) and translated into several languages.

The second single from Richard’s second album, Repeat Offender (1989). Richard Marx wrote the song as a love letter to his then wife, actress Cynthia Rhodes (Staying Alive, Dirty Dancing). The single reached number 1 on the Billboard Hot 100 Chart in the U.S. and many other countries incl. Canada, Australia and Japan.

No other woman, is gonna love you more
Cause tonight is the night, that I’m feeling alright
We’ll be making love the whole night through
So I’m saving all my love for you

The song was written by Michael Masser and Gerry Goffin and originally released by Marilyn McCoo and Billy Davis Jr. in 1978. Whitney Houston‘s cover was released as a second single from her self-titled debut album in 1985. The single reached number 1 both on the U.S. and U.K. official singles charts.

The fourth single from Duran Duran‘s 1982 famous album Rio. The video was filmed by director Russell Mulcah in Sri Lanka. The single hit number 1 spot on the French Airplay Chart and reached #2 in the U.K. and Ireland. The US single version was released in January 1985 reaching number 16 on the Billboard Hot 100 Chart.

The fifth (and the final) single from the a-ha‘s 1986 debut album of the same name. The original album version is played with synthesizers, the remixed single version contains additional production and features an orchestra. The single reached number 1 in Norway and top ten on many European charts.

A song written by Giorgio Moroder and Tom Whitlock for the film Top Gun (Tom Cruise, Kelly McGillis, Val Kilmer). The Berlin‘s single reached number 1 on the UK and US singles charts. The song won both the Academy Award and the Golden Globe Award for Best Original Song in 1986.

The first single from the Welsh singer’s 1983 album Faster Than the Speed of Night. Number 1 in many countries, including the U.S., France and the U.K. Worldwide, the Bonnie Tyler‘s single has sales of more than 6 million copies

The lady in red is dancing with me,
Cheek to cheek,
There’s nobody here,
It’s just you and me…

The single was released in the summer of 1986 as the second single from the album Into the Light. It became de Burgh’s best-selling single – it reached the number one spot in the UK, Canada, Ireland, Poland, Belgium, Norway and South Africa… It also reached #3 on the Billboard Hot 100 singles chart in the U.S. one year later.

The song was written and produced by Dieter Bohlen (Modern Talking, Blue System). It reached number 1 on the singles charts in Germany and Austria in 1986. The song appears on the soundtrack to German TV series “Tatort”.

The third single from band’s 1986 album The Final Countdown. The ballad was co-written by Europe‘s vocalist Joey Tempest and keyboardist Mic Michaeli. The single was released in January 1987, reaching number 3 on the U.S. Billboard Hot 100 Chart.

The second single from Bangles‘ 1988 album Everything. The ballad Eternal Flame was written by Billy Steinberg, Tom Kelly and the Bangles’ Susanna Hoffs. It went to number 1 on the singles charts in many countries, including the U.S., Australia and the U.K.

A song written by Billy Steinberg and Tom Kelly was originally released for their project I-Ten in 1983.  The Heart‘s cover was released as the first single from their 1987 album Bad Animals   that reached number 1 in the U.S and Canada and #3 in the U.K.

The song was originally recorded for a Coca-Cola commercial in 1987. It was released as a single in January 1998 and went to number 1 spot on the singles chart in the United Kingdom, Germany, Switzerland and many other countries.

The song was originally written by Kenny Gamble and Leon Huff for (but never recorded) Labelle. At last it was released as a single in 1972 by soul musical group Harold Melvin & the Blue Notes. The Simply Red‘s cover was released in 1989 and reached number 1 in the U.S., New Zealand and Australia, and #2 in the U.K.
[endsection] [section=Terence Trent D’Arby – Sign Your Name]

The fourth single from his 1987 debut album “Introducing the Hardline According to Terence Trent D’Arby“.  The single was released in December 1987 reaching number two on the UK Singles Chart, #3 in Australia and #4 on the U.S. Billboard Hot 100 Chart.
ff