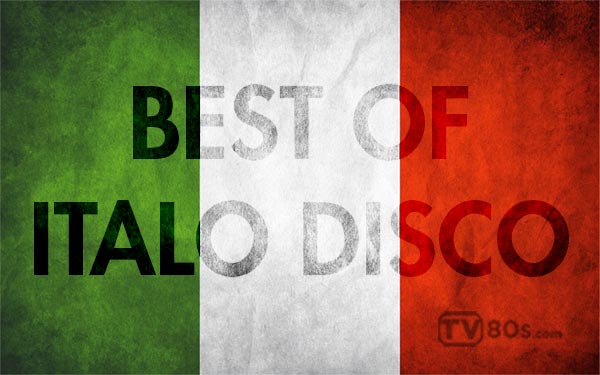 A song by Raf (Raffaele Riefoli) was written by him, Giancarlo Bigazzi and Steve Piccolo. It was released as a single in 1984 and became a huge hit in Italy, Germany, Austria and Switzerland. The song was immediately covered by Laura Branigan. Her version reached number 1 in Austria, Canada, Finland… Both versions of the song were one of the most popular singles of 1984 in Europe.

The single from Iván’s (stage name of Spanish singer Juan Carlos Ramos Vaquero) 1985 album Baila. It reached number 3 in France, 4 in Switzerland and #9 on the singles chart in Germany.

The single by Miko Mission (born Pier Michele Bozzetti) was written by Graziano Pegoraro and Tony Carrasco. It was released in 1984. Mike Mission is also co-writer of many hits (Taffy – I Love My Radio, Silver Pozzoli – Around My Dream).

American singer, composer, and producer Linda Jo Rizzo is a former member of a group The Flirts. In 1984 Linda moved to Germany and started solo music career. “You’re My First You’re My Last” was written by Linda and Elvine (frontman of the group Atlantis 2000) and released as a single in 1986.

A single by American Italo disco singer Taffy (born Katherine Quaye) was released in 1985. It reached number 5 in Italy and #6 on the official UK Singles Chart and on the U.S. Dance Chart. The UK version was re-recorded and retitled as “I Love My Radio (Dee Jay’s Radio)”.

The group was created by italian composer Manlio Cangelli. Scotch are also known for their hits “Penguin invasion”, “Delirio Mind” and “Take Me Up”. The single “Disco Band” was released in 1984 as a third single from the album “Evolution”. It became a hit in Germany – it reached number 3 on the official singles chart. It was successful also in Switzerland (#4), Portugal (#4), Italy (#28) and Sweden (#20).

The first single by Italian singer, music producer and composer Roberto Zanetti known under the stage name Savage and as a producer “Robyx” (best known for his work for Ice MC) “Don’t Cry Tonight” was written by Roberto himself and released as a single in 1983. It was re-released as “Don’t Cry Tonight -’89 verison” in 1989 and remixed many times. Original version appears on Savage’s 1984 album “Tonight”.

A song by German musician Mike Mareen (born Uwe-Michael Wischhoff). He is also known for his hits “Dancing In The Dark” (1985) and “Agent Of Liberty” (1986). “Love Spy” was released in 1986 with the instrumental version on the B-side of the single.

The biggest hit by Italo disco project Martinelli, founded by Aldo Michele Martinelli, producer of Raggio Di Luna or Doctor’s Cat) and singer Simona Zanini. It hit number 5 on the singles chart in Austria and France, #6 in Switzerland and #8 in Germany in 1985.

The biggest hit by Italian italo disco singer Silver Pozzoli (born Silvio Pozzoli). It was released as a single in 1984 and hit number 1 on the singles chart in South Africa and #9 in Germany. “Around My Dream” was re-released in 1986 (“remix”) and in 1993 “Around My Dream ’93”. Pozzoli also performed vocals for the song “Mad Desire” by Den Harrow.

One of the most famous italo disco songs was written by Pierluigi Giombini, best known as an author of Gazebo’s “I Like Chopin” and “Masterpiece”. Dolce Vita was released as a debut single by Italian musician and actor Ryan Paris (born Fabio Roscioli). It appears on his self-titled 1984 album. The single hit number 1 on the Eurochart Hot 100 and on the official charts in Belgium, Netherlands and Spain. It reached top ten in many European Coutries, incl. #5 in the UK in 1983.

Debut and the most successful single by Italian singer P. Lion (born Pietro Paolo Pelandi). It was produced Davide Zambelli of the band Scotch. It appears on his 1984 debut album “Springtime”. “Happy Children” reached top 20 in the singles charts in many European countries.

A song by Italian singer Ken Laszlo (born Gianni Coraini) was written by Gino Caria and Sandro Oliva. It was released in 1985 as a second Ken’s single. It was charted in the singles charts in many European countries (#7 in Sweden). Ken Laszlo is also known for his italo disco hits “Hey Hey Guy” and “1, 2, 3, 4, 5, 6, 7, 8”.

One of the most successful singles by italo disco project fronted by Italian fashion model Stefano Zandri. It was released in 1985 as a second single from the album “Overpower”. It reached number 3 in Italy and #10 on the singles chart in Spain. Den Harrow is best known for the hit “Don’t Break My Heart”. It was revealed that Stefano Zandri did not actually sing the Den Harrow songs, he lip-synched to vocals recorded by another artists – vocals on Bad Boy are provided by American vocalist Tom Hooker who also co-wrote many Den Harrow’songs.

The fifth single by Italian DJ, producer and singer Albert One (born Alberto Carpani). A song appears on his 1988 album “Everybody”. The single “For Your Love” was released already in 1986. Alberto Carpani is known known also as A1, Jock Hattle, and A.C. One. He was involved in many Italo disco projects such as Clock On, Enola, Funny Twins or Tom Dollar.

Italo disco project Happy Station was founded by producers Dario Raimondi and Alvaro Ugolini, who teamed up with studio vocalists Antonella Pepe, Angela Parisi and Ivana Spagna. Raimondi and Ugolini decided to use models for Fun Fun’s public image instead of the vocalists themselves. The debut single “Happy Station” was released in 1983. It hit number 1 on the singles charts in South Africa and Belgium. “Happy Station” appears on the groups 1984 album “Have Fun!”.

A song by Italian musician Gazebo (born Paul Mazzolini) was released in 1983 as a second single from the debut self-titled album with instrumental version on the B-side. It became a huge hit, “I Like Chopin” sold 8 million copies worldwide and hit number on the Italian singles chart and in 15 other countries in 1983. The song was composed by Gazebo himself and Pierluigi Giombini.

The second single by Croatian singer (born in Zagreb, former Yugoslavia). It hit number 1 spot in Italy and reached top ten also in Norway, Switzerland and Germany in 1984. Song was written by Sandy Marton and Claudio Cecchetto (co-writter of Taffy’s I Love My Radio).

The single by German singer Fancy (born Manfred Alois Segieth) appears on his second album “Contact” (1986). “Bolero” was written by Anthony Monn and Shane Dempsey, and hit number 1 spot on the singles chart in Spain and #2 in Portugal in 1985. Fancy is best known for his first hit “Slice Me Nice” (1984). He has also recorded many hits for other artists (Grant Miller, Linda Jo Rizzo, Mozzart, Timerider…)

The first single by Italian singer Mr. Zivago (born Massimo Rastrelli). The song was written by Azel and Marco Masini. It was released in 1987 with Radio Version and Instrumental Version on the B side of the single.

The first single by Italian singer Mauro (born Mauro Spessot). It was released in 1987 with “Olé Olé (Bandolito Amor)” on the B-side of the single. Song was written by Claus Mathias Clamath and Majo Rolyat. It was very popular in the Eastern Europe (reached number 1 on the charts in Bulgaria and Romania)

Baltimora was an Italian group with Northern Irish frontman Jimmy McShane. Tarzan Boy was the group’s debut single. It was released in spring 1985, from its first album Living in the Background (“Woodie Boogie”, “Living In A Background” and “Juke Box Boy” followed). “Tarzan Boy” hit number 1 spot on the singles charts in Spain, Belgium, France, Finland, Netherlands and on Eurochart Hot 100. It reached also number 3 on the UK singles chart and #13 on the Billboard Hot 100 chart in the U.S. The single was certified gold in Spain, Canada and France.

The first single by an Italo disco musical project Valerie Dore. The song was produced by Roberto Gasparini and Lino Nicolosi, the vocals were provided by vocals by Dora Carofiglio. Monica Stucchi provided the public face of the singer in “live” lip-synched performances (but Stucchi recorded some lead vocals for 1986 “The Legend” album and uses moniker Valerie Dore).

The debut single by English ex-model Edward Huntington was released in 1986. The single reached number 6 in Switzerland, #23 in Germany and became a hit in the form USSR. It was followed by singles “Up & Down”, “Meet My Friend”, ”Physical Attraction” and “May Day” and appears on Eddy’s first and only album “Bang Bang Baby” that was released in 1989.

The song was written by Abacab, Ivana Spagna and Ottavio Bacciocchi. It was released in 1983 with “Ice Cream” on the B-side of the single. The song became a European hit single when covered by German band Boney M in November 1984

French singer Raggio Di Luna is known also as Moon Ray (born Mandy Ligios). The single Comanchero was produced by Aldo Martinelli and Simona Zanini. It reached number 2 on the singles chart in Austria, #3 in Germany, #4 in Switzerland #5 in France and #17 in Italy.

Italo disco project, fronted by the Florian Fadinger, former manager of famous German DJ Sven Väth (aka Off in the 80s). All of the singing on was allegedly done by Italian musician Romano Trevisani.”Lady Fantasy” reached number 21 on the singles chart in Germany.

The most successful single by Italian italo disco duo Righeira, that was founded by Stefano Rota and Stefano Righi. “Vamos a la playa” (Let’s Go to the Beach) was composed by was composed by Stefano Righi together with Carmelo la Bionda and released in 1983 as a single. It hit number 1 on the singles chart in Italy and Switzerland and reached top ten on the charts in many European countries.

A huge hit by Italian singer, actress and model Sabrina (born Norma Sabrina Salerno) was written by Matteo Bonsanto, Roberto Rossi, Claudio Cecchetto, M.Charlton and A Gill. “Boys” single was released in 1987 and spent many weeks in top ten of singles charts all over the Europe, including the U.K. (#3). The song appears on Sabrina’s debut self-titled album (1987).