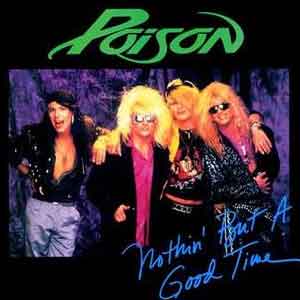 Poison – Nothin’ But A Good Time – Official Music Video
The song was written by Poison members, written by Bobby Dall, C.C. DeVille, Bret Michaels and Rikki Rockett, along with Jordi Carretero (as Bombilla). “Nothin’ But A Good Time” was released as the lead single from their second album, “Open Up and Say… Ahh!”. It was released in April 1988 with “Look But You Can’t Touch” on the B-side. The single reached #6 on the Billboard Hot 100 chart in the United States.

Read “Nothing But a Good Time” by Poison on Genius