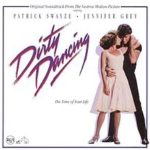 The original soundtrack of the 1987 American romantic film Dirty Dancing, written by Eleanor Bergstein and directed by Emile Ardolino with the film stars Patrick Swayze and Jennifer Grey in the lead roles. The album went multiplatinum in Australia, Germany, United States, United Kingdom, Netherlands, Sweden, Switzerland… It spent 18 weeks as a number one on the Billboard albums chart. There was a follow-up album entitled “More Dirty Dancing” released in 1988 and “Ultimate Dirty Dancing” (2003) that contains every song from the film Dirty Dancing sequenced in the order it appears in the film and “Dirty Dancing “20th_Anniversary_Edition” released in 2007