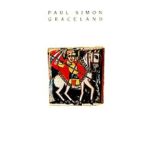 The  seventh solo studio album by American singer and songwriter Paul Simon was released in August 1986. It produced four singles, including “You Can Call Me Al”, that hit number 4 on the official UK singes chart. “Graceland” album hit number 1 on the album charts in the UK, Australia, Canada, New Zealand, South Africa and European Top 100 Albums and #2 in the U.S and became Simon’s most successful studio album.