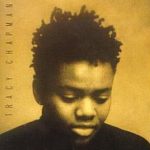 The self-titled debut album by singer and songwriter Tracy Chapman was released in April 1988. All songs were written by Tracy Chapman. The album hit number 1 spot on the albums charts in the U.S., U.K., Germany, New Zealand and many other countries. In total, the album sold over 20 million copies worldwide. The album  was awarded with Grammy Award for a Best Contemporary Folk Album and the single “Fast Car” for Best Female Pop Vocal Performance (Grammy Award) and Best Female Video (Billboard Music Awards).