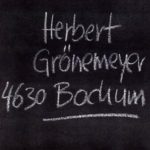 The fifth studio album released by the German rock star Herbert Grönemeyer was released in August 1984. It became the most successful album of 1984 in Germany with 79 weeks in the German album charts (13 weeks in Switzerland and 24 weeks in Austria) and the third all time best-selling album in Germany. A song “Männer” was released as a single and hit number 7 on the German singles chart in 1984. It was covered many times (Oli.P and Xavier Naidoo, Katja Friedenberg on the The Voice of Germany etc.)