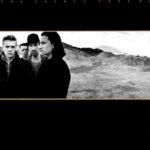 The fifth studio album by Irish band U2. The Joshua Tree was produced by Daniel Lanois and Brian Eno and released in March 1987. The album topped the album charts in more than 20 countries including the United States, United Kingdom, Canada, Germany and France. The album produced five singles incl. With Or Without You that hit number one spot on the singles chart in the U.S., Canada and Ireland.  “Exit” song was not released as a single but it charted in the Netherlands (#46)