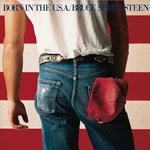 4 Working on the Highway

11 Dancing in the Dark