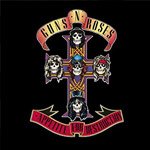 1 Welcome to the Jungle