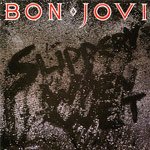 Bon Jovi’s third studio album was released in August 1986. Most of the songs were written by the band members Jon Bon Jovi and Richie Sambora. The album produced four official singles: “You Give Love a Bad Name” (released July 23, 1986),  “Livin’ on a Prayer” (October 31, 1986), “Wanted Dead or Alive” (March 2, 1987), and Never Say Goodbye (June 15, 1987). “Slippery When Wet” topped the album charts in the United States, Australia, Canda, New Zealand, Switzerland, Finland, and Norway.

2 You Give Love a Bad Name

3 Livin’ on a Prayer

10 Wild in the Streets