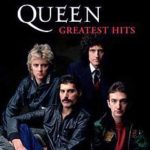 A compilation album by the British rock band Queen consisting of band’s best-selling singles was released in October 1981. The album spent more than 700 weeks in the UK Charts, and is the best-selling album of all time in the UK with more than 6 million copies there. It is certified 8x Platinum in the U.S., reached number 1 on the charts in Germany, New Zealand, Austria, Nehterlands… Exactly ten years later “Gratest hits II” compilation was released.