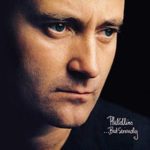 The album was released on 20 November 1989. It was the best-selling album of 1990 in the UK. All tracks were written by Phil Collins. “Another Day in Paradise” was released in October 1989 as as single and became a major hit worldwide reaching number 1 in the United States and Germany and #2 on the Official UK Singles Chart. I Wish It Would Rain Down, Something Happened on the Way to Heaven, That’s Just the Way It Is and Hang in Long Enough were released as singles in 1990 followed by the release of the live album Serious Hits… Live!