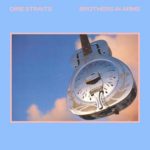 The fifth studio album by the British band Dire Straits was released in May 1985.  The album spent at number one position ten 10 weeks on the UK Albums Chart, nine weeks on the Billboard 200 in the U.S., and 34 weeks on the Album Chart in Australia. The album was awarded with two Grammy Awards in 1986 (for Best Engineered Recording, Non-Classical Album and for Best Rock Performance by a Duo or Group with Vocal for “Money for Nothing”), and with 1987 Brit Awards for Best British Album. The album produced five official singles.